The Best Indie Games You Didn’t Play in 2017

Dozens of games come out every week on Steam, itch.io, Game Jolt, and other corners of the web. With so many awesome indie games and such little time in the day, it can be hard to sort through it all to find the perfect one for you.

This year, we rounded up some of the coolest new indie games each month to ensure you never missed one worth playing. Below, you'll find a compilation of some of the best games from the entire year.

Marvel’s Create Your Own Comic Platform Comes With Restrictions

Marvel's Create Your Own platform is set to let you take control of creating your own comics using Marvel superheroes, but some restrictions apply.

The website for the not-yet launched platform lists the restrictions, some of which are pretty straight-forward, while others seem odd. For example, the platform is region-specific, so only aspiring comic writers "physically located" in the US, Canada, Australia, and Singapore can use the service.

John Williams will write a theme for Solo: A Star Wars Story.

In an interview with Variety, Williams revealed he will be working on his ninth Star Wars film, with John Powell still staying on as Solo's primary composer.

"The present plan is that I’m writing a theme for Han Solo, and John Powell is going to write the score, which he’ll do brilliantly," Williams said.

Powell will be writing the rest of the themes for the movie, which Williams says he's excited to hear. Lucasfilm announced Powell as Solo's composer earlier this summer.

Mario Odyssey: How to Coin Farm for 999 Moons

If you plan on collecting every single thing in Super Mario Odyssey, you’re going to need a lot of coins. And by a lot, we mean 37,189 coins if you don’t use amiibo to get any outfits. It takes 11,900 coins just to get the final Power Moons, and one special outfit costs 9,999 coins alone.

Below are great coin farming spots that should help make getting coins for those final moons and outfits much easier. We’ve picked three spots that you can reach early, midway, and late into the game.

An absurd number of incredible games came out this year, so it seems crazy to think that there were supposed to be even more.

As 2017 began, we were expecting to get games like Red Dead Redemption 2, Shenmue 3, and even a new Toejam and Earl. Frankly, I’m sort of glad we didn’t given how big my 2017 backlog is without them. But here are 15 of the biggest games that got pushed to 2018.

Original launch window: The second half of 2017

There’s no other way to start this list than with Red Dead Redemption 2. People have been waiting on bated breath for more info - and while we thought we’d get a release this year, we ended up only getting a brief gameplay trailer. It was originally supposed to come out in late 2017, but has been pushed to the second quarter of 2018.

There's no doubt that 2017 has been a fantastic year for Nintendo. With the new year just around the corner, it's time to look back and go over some of the best Switch games released this month.

There’s no point in dodging the fact that Brawlout bears a striking resemblance to the Super Smash Bros. series. It plays very similarly to Nintendo’s already massively popular fighting game franchise, but trust me, that’s a good thing. With a colorful mix of original and franchised characters from other indie games, Brawlout doesn’t hold back on fast-paced action. In fact, It removes the incentive for using defensive strategies by entirely ditching the ability to block and emphasizes on all-out attack.

Weeelcooome to Nintendo Voice Chat, Episode 388 -- our big NVC Year in Review for 2017! In this special year-end episode, we reflect back on Nintendo's year in 2017: the good, the bad, and everything in-between. Please keep in mind; this episode was recorded in advance. But don't worry, we'll be back next week with our regularly scheduled programming.

As always, you can watch NVC here on IGN and on our YouTube channel (subscribe and hit the bell!) or listen to it on your commute in audio format. If you enjoy the show, share it with other Nintendo fans, make a constructive comment, and give us a thumbs up or leave us a review. Listen to the Latest Episode of NVC Right Here

Warner Bros. has released new photos from the upcoming Fantastic Beasts sequel, The Crimes of Grindelwald.

The photos, which you can view below, feature some new and familiar faces, including a proper look at Jude Law playing a younger Albus Dumbledore. Also featured are the returning Eddie Redmayne as Newt Scamander and Johnny Depp as the titular villain Gellert Grindelwald.

The Crimes of Grindelwald picks up where the first film left off, with Grindelwald escaping custody and gathering pure-blood wizards to help rule over all non-magical beings. In order to put a stop to Grindewald's plans, Albus Dumbledore decides to team up with his former student Newt Scamander. As previously reported, much of the film will be set in Paris.

Why Collecting 900 Korok Seeds Gets You a Giant Poop

Of the many tasks in The Legend of Zelda: Breath of the Wild, collecting every Korok seed is perhaps the most daunting. Around every corner, at the top of every mountain, behind every pillar, a Korok seed could be waiting, along with a short puzzle or race in order to unlock it.

After finally completing the monumental task of collecting all nine hundred of them, your reward is probably not what you were expecting: Hestu’s Gift, a golden piece of poop. 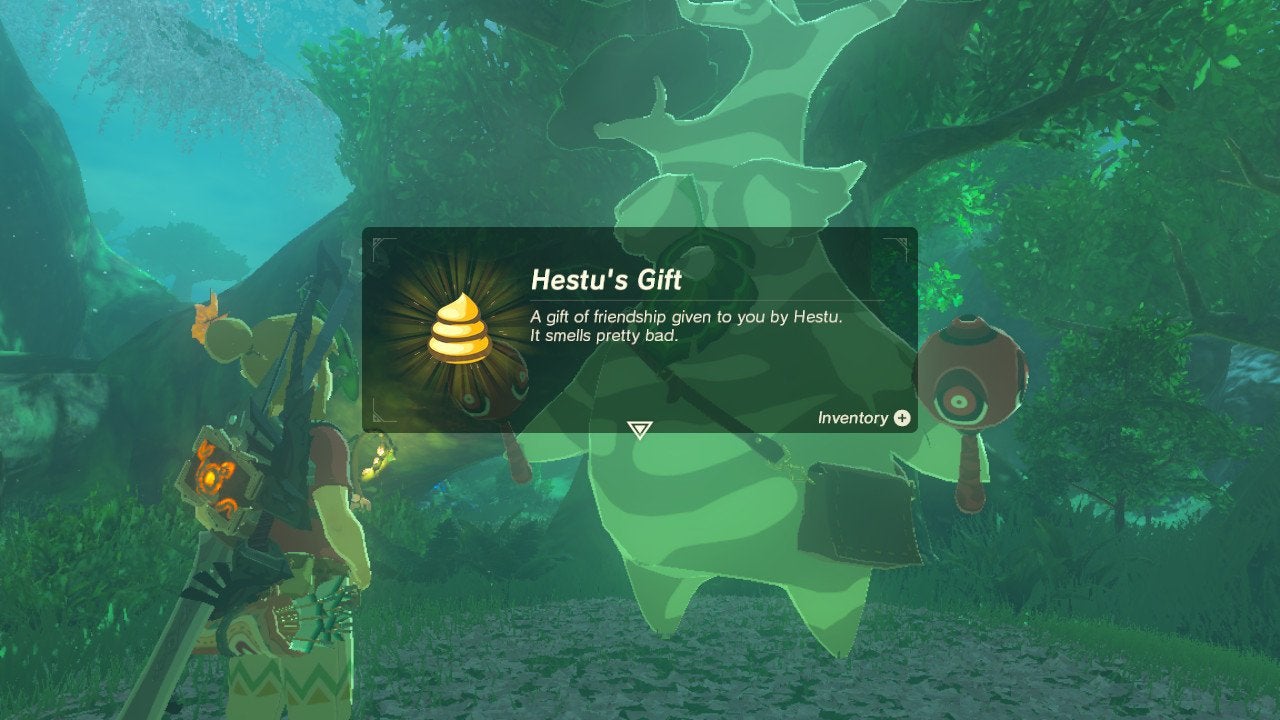