Netflix has suspended production on House of Cards: Season 6 "until further notice."

The company announced today on Twitter that filming, which began two weeks ago, has temporarily stopped in light of the recent allegations made against Kevin Spacey.

"Production on the final season of House of Cards is suspended until further notice," Netflix said. "This will give us time to review the current situation with our producing partners at MRC. Execs are on set this week discussing with our cast and crew. More details to come."

Netflix recently revealed that the upcoming sixth season of House of Cards will be its last. The decision to end the show was reportedly made months ago. Netflix and MRC released a joint statement saying they are "deeply troubled" by these allegations against Spacey.

In a series of tweets, Pak praised director Taika Waititi's work on the film, saying, "Just got back from a Thor: Ragnarok screening—and I absolutely loved it. Huge, huge high five, Taika Waititi!"

Pak went on to say it was a "total thrill seeing all those Planet Hulk elements and characters" in the film.

Thor: Ragnarok pays homage to the Planet Hulk ark and features aspects of Hulk's alien world adventures despite being a Thor title. In fact, Bruce Banner actor Mark Ruffalo told IGN that Ragnarok is the first in a three-movie story arc for the Hulk.

Stranger Things Wants You to Question Your Opinion of Billy

Spoilers below for Stranger Things: Season 2.

Stranger Things: Season 2 newcomer Dacre Montgomery wants you to believe that his character Billy is more than the hot-headed bully we see him portray. In a recent interview with the young Australian actor, he was adamant about Billy not being just some one-dimensional character.

“I said to them (the Duffer Brothers), that I really want the audience to have something that they see in Billy that makes him more likable,” Montgomery told IGN during a group interview. “You want to see some of the background and later, in episode 8, with my dad, played by Will Chase, who’s amazing. You get to see why Billy is the way he is.”

The team behind Eve Online has put the development of its VR space combat game Eve: Valkyrie on hold.

In an interview with the Iceland Monitor (via Polygon) CEO of CCP Hilmar Veigar Pétursson explains that Eve: Valkyrie will be put "on the shelf" while the company steps out of the VR market for two or three years.

Pétursson indicated this was a direct response to how VR has been received commercially, but also said, “We have been front and center in the second wave of VR,” adding, “Our belief in the long-term transformative power of the technology remains strong.”

Sony has revealed that 67.5 million PlayStation 4 consoles have been shipped as of September 30 this year.

Financial results for the second quarter of fiscal year 2017 reveal that Sony Interactive Entertainment sent 4.2 million units to retailers this quarter bringing up the lifetime total to 67.5 million units shipped.

These numbers result in the company raising its predictions to meet 79 million units shipped by March 2018.

Sony's game and network services which encompass PlayStation and PlayStation Network have also seen an increase in revenue and operating income across the board.

Sony recently held its media showcase at Paris Games week. You can find all the news and trailers from the event in our wrap up and check out 14 new PS4 and PSVR announcements Sony made over the course of Paris Games week.

The Persona series has reached a new sales milestone. According to SEGA's 2017 annual report, the franchise has now topped 8.5 million units sold (packaged and digital total) across 13 total editions. The series first launched back in 1996.

For more on Persona, be sure to read IGN's glowing review of Persona 5, which we scored a 9.7. Also check out what might be next for Persona 5 developer Atlus and read about the upcoming Persona 5 anime TV series.

Tonight’s episode of The Flash, “Elongated Journey Into Night,” introduces a new character named Breacher played by action star Danny Trejo. Trejo is known for using his cold stares and gravelly voice to play tough, intimidating characters, and while Breacher is certainly in that vein, calling for a dead-serious performance, Trejo couldn’t keep it together during filming.

“I love comedy. Being fierce ain't that hard, you just show up. I like the way they put both menacing and funny together. The whole thing would sometimes just crack me up,” Trejo said at a press event to screen and talk about the episode.

On top of being one of the most feared and ruthless bounty hunters across the Multiverse, Breacher is Gypsy’s father, so you won’t be surprised to hear he’s not happy to find her in Cisco’s arms when he comes for a visit. It’s not long before he tells Cisco he’s going to hunt him like one of his bounties, and unceremoniously begins a countdown from 10. To say Breacher is extreme is an understatement, with the way he switches in the blink of an eye from showing affection for his daughter to murderous disdain for Cisco. Trejo said they had to keep redoing scenes because he kept laughing at his lines where he had to make ridiculous threats on Cisco’s life while keeping a straight face.

Nintendo has revealed how Switch owners are utilizing the hybrid system.

At Nintendo's recent financial briefing, the company showed that around half of Switch owners use the console in both modes: TV and handheld. But what might be surprising is that more people play the system mainly undocked than hooked up to the big screen. 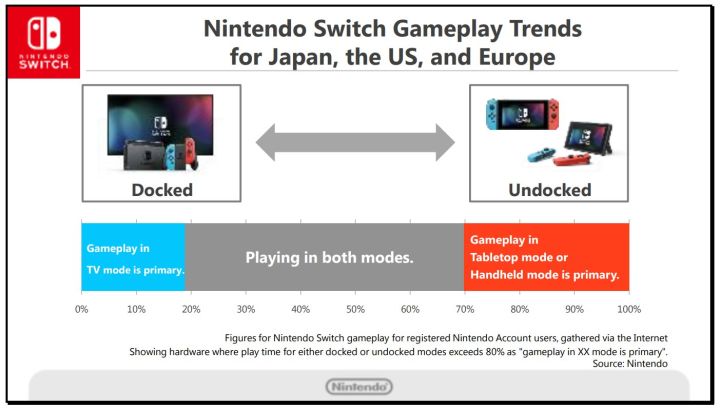 Nintendo released this graph at a recent financial briefing to highlight how people are utilizing the Switch. (Courtesy of Nintendo)

Special effects artist Neal Scanlan, who heads up the Creature Workshop for Star Wars: The Last Jedi, has shed some light on the origins of those mysterious Crystal Foxes from the film's latest trailer.

As for the adorable Porgs, it seems Chewbacca actually befriends one during the course of the film. The very same Porg who is seen in the Millennium Falcon with Chewie "shows some very Wookiee traits in the way he's coloured; his patterning is very similar to Chewie's."

Nintendo Says 3DS Sales Are Stable, Even After Switch

Nintendo has made a point to show that Switch sales haven't significantly impacted 3DS hardware numbers so far.

During a recent financial briefing, Nintendo president Tatsumi Kimishima said, "Even after Nintendo Switch sales began, sales of the Nintendo 3DS family remain stable, as you can see here." He was pointing to a graph that's showcased below. 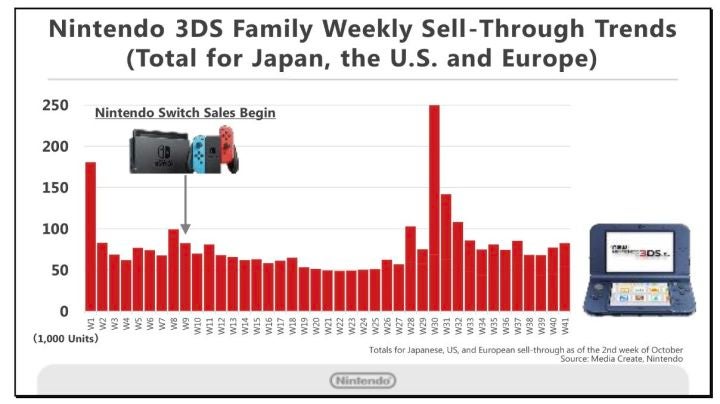 Nintendo highlights how 3DS sales have stayed stable this year, even after Switch's release. (Courtesy of Nintendo)