Following last week’s server outage, Ubisoft has detailed what they’ll be doing to make it up to players.

With an undisclosed number of players unable to access For Honor’s online mode between February 13 to February 26, Ubisoft is offering Champion Status to all to make up for the hiccup. The peace offering will be available from March 3 to March 5 on all platforms.

To claim Champion Status, all you need to do is log in on the above-mentioned dates. For those unfamiliar with what Champion Status is, Ubisoft explains it as so:

Help us get to 2000 likes! Like our page to get the latest deals straight to your news feed and also to find exclusive codes that we provide for our readers.

Use Coupon Code COOP20: Starting from today and ending Thursday March 2nd at midnight, Co-op Electrical have provided a coupon code which gets you 20% off a minimum £50 spend and a maximum discount of £50. Some great deals including a PS4 (500GB) with Call of Duty: Infinite Warfare - was £229.99 now £184 delivered.

Ever wondered what would happen if Overwatch was fused with Job Simulator?

Following a weekend hack project, Job Simulator developer Owlchemy Labs has created a makeshift world of Overwatch within the 9-5 simulator. The mod, which sadly will not be released for public consumption, features Reaper’s gun – represented by two staplers – Mei’s icewall (a spray can), and Widowmaker’s sniper rifle (bottle of grape juice with a mug taped on) all being used to fend off an approaching Pharah, Reinhardt and mini-McCree.

If you’re a fan of Overwatch, the video below is a must-watch.

Deadpool comic creator Rob Liefeld wants Russell Crowe to star as Cable in Fox's upcoming Deadpool sequel, and the actor has responded to his request.

In a post on Twitter, Liefeld said to Crowe: "@russellcrowe you should read for Cable in Deadpool and X-Force. Just sayin..." to which the Oscar-winning actor (who doesn't have to "read" for a role at this point) replied: "I should read for it?"

Shortly thereafter, Liefeld apologized, telling Crowe he's a "huge fan" and that his prior tweet was "poorly worded." Crowe responded by saying, "I'm sure if @VancityReynolds

According to The Hollywood Reporter, Moyer will play main character Reed, an attorney who struggles to balance his family life and his demanding job at at the DA's office. In real life Moyer is married to his fellow Ture Blood star Anna Paquin, who plays Rogue in the X-Men movies.

Moyer joins a cast that includes Jamie Chung (Once Upon A Time), who's playing the mutant Blink, and Blair Redford (Switched at Birth, Satisfaction), who's starring as the mutant Sam. X-Men movie guru Bryan Singer will helm the show's pilot, with Burn Notice Matt Nix penning the script and executive-producing alongside Singer.

Ayer shared an image of longtime Batman villain Black Mask on Twitter. While this doesn't confirm Black Mask will indeed be Gotham City Sirens' main antagonist, Ayer did do a similar thing for Suicide Squad by providing our first look at Jared Leto's Joker on social media.

This week’s Supergirl episode ended with some big reveals regarding Jeremiah Danvers (Dean Cain) – including both his Cadmus-provided physical enhancements and that he was helping them and Lilian Luthor, betraying the DEO and his daughters in the process.

Following a screening of this episode, Supergirl executive producer Andrew Kreisberg and actress Chyler Leigh (“Alex Danvers”) discussed what’s next for the series, including new characters played by Teri Hatcher and Kevin Sorbo and much more.

“Homecoming” ended with the reveal that Lilian Luthor now had a list of all documented aliens (thanks to Jeremiah), along with what looked to be a large space ship.

Australia’s Interactive Games & Entertainment Association has today announced that the Australian video game industry generated $2.958 billion in revenue in 2016. This represents a four per cent increase in overall sales from 2015.

The total figure is made up of $1.893 billion in digital and mobile sales and $1.065 billion in traditional retail sales.

Digital sales are up 19 per cent and although the larger portion of the final sum remains mobile games ($988 million) the biggest growth came from downloads (full games and DLC). Downloads overall are up 26 per cent, and DLC is up 31 per cent within that.

Top Comics to Buy This Week 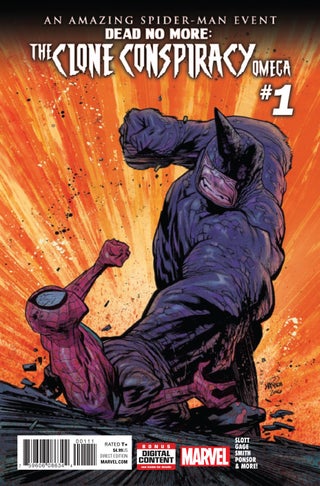 It ain't over until the fat lady sings... or the giant guy in a rhino costume charges. This week Marvel officially closes the door on The Clone Conspiracy with an oversized one-shot that explores the fallout of the Jackal's failed cloning experiment. Aside from exploring a violent clash between Spidey and Rhino, the stories in this issue will also explore the fates of both Ben Reilly and the Lizard. This book will directly set the stage for both Ben Reilly: Scarlet Spider and Dan Slott's next Amazing Spider-Man story arc, including giving readers a taste of what artist Stuart Immonen will be bringing to the table in a few months.

Peter Moore is leaving his role as Chief Competition Officer at Electronic Arts to become CEO of Liverpool Football Club.

The news first broke in a press release posted on Liverpool FC's website. Moore will take up his new role in June, and will be reporting directly to the club's owners.

"The 61-year-old is currently chief competition officer at Electronic Arts, based in the United States, and will move to Liverpool to join the club in the summer" read the release. "His nearly 10 years at EA have seen him in a number of leadership positions, including chief operating officer and president of EA SPORTS."