Why Wedge Wasn’t Included in Rogue One

There are specific reasons why Wedge Antilles, the beloved starfighter pilot for the Rebel Alliance in the original Star Wars trilogy, wasn't included in Rogue One: A Star Wars Story.

Despite both Red and Gold Leader making a surprise appearance in the film during the Battle of Scarif, Wedge was nowhere to be seen. Lucasfilm Story Group's Pablo Hidalgo explained on Twitter that Wedge wouldn't actually be there in the battle, as the starfighter pilot had never seen the Death Star before A New Hope. Wedge famously says "Look at the size of that thing!" when he first sees the Death Star in Episode IV, and that was the line Hidalgo and Lucasfilm were trying to preserve.

The two leads for Marvel's Cloak and Dagger TV series have been unmasked.

Actress and singer Olivia Holt (Kickin' It) will play Tandy Bowen/Dagger, while Aubrey Joseph (The Night Of) will portray Tyrone Johnson/Cloak. In the official cast announcement, Marvel describes the Cloak and Dagger show as a coming-of-age story. 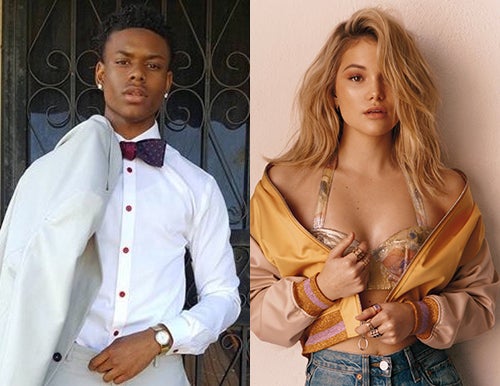 Aubrey Joseph and Olivia Holt will star in Marvel's Cloak and Dagger.

Expect a new Game of Thrones story written by George R.R. Martin to be released in 2017, even if it's not The Winds of Winter.

An Amazon listing for a new anthology collection called Book of Swords, from editor Gardner Dozois, teases "15 original tales celebrating fantasy’s golden age of sword and sorcery, including a new story from George R. R. Martin set in the world of A Game of Thrones!" The anthology is slated to be released on October 10th.

Overwatch Pops are a hot ticket item, between the run away success of the game and the sweeping popularity of all things Funko Pop. While there are only so many characters in the Overwatch universe, there are plenty of cool variations on familiar characters to make any collector excited. Recently Funko announced wave 2 of its Overwatch Funko Pops, which means completing your set got just a little harder. Especially since the new figures open up new possibilities for exclusive variants.

Let's take a look at the best of the best of Overwatch Funko Pops. Most of these Funko Pops are exclusive to specific retailers or were only sold at specific events, but they can still be nabbed for a premium price from Amazon, Ebay, and other retailers via third-party resellers. So if you see one you just have to have, you aren't completely out of luck, if you have some extra dough. Let's take a look:

Peter Capaldi Is Leaving Doctor Who

Peter Capaldi and the BBC have confirmed that the actor is leaving Doctor Who.

The news comes via the official Doctor Who Twitter feed, which relayed Capaldi's reveal from an interview on BBC Radio.

will be my last… I feel it’s time to move on," the man who plays the Twelfth Doctor said.

The star of the long-running sci-fi series added that while he'll step down in Christmas of 2017, "I’m still Doctor Who! We’re doing epic stuff! I’m not done yet!”

Presumably this means that Capaldi's final episode and the regeneration of a new Doctor will take place in the traditional Who Christmas Special. The tenth season of the show is slated to debut in April of this year, and its conclusion will also mark showrunner Steven Moffat's departure from the Who world. Ever since Moffat announced that he was leaving, fans have speculated that Capaldi would follow.

Zelda: BotW ‘Impossible’ to 100 Percent Complete in a Week

The Legend of Zelda: Breath of the Wild is so large that, according to series producer Eiji Aonuma, it will be "impossible" for players complete the game in its entirety within a week.

The Completionist -- a YouTuber who attempts to 100 percent complete a game within the span of 7 days each week -- asked Aonuma about creating Breath of the Wild's rich world, and the series producer prefaced his response by saying, "First of all, it's going to be impossible for you to 100 percent complete Breath of the Wild!" Be sure to watch the video below to see how it all unfolds:

Aonuma went on to say that "development was certainly a long road," noting that they initially started with just an empty field and progressively added new elements to flesh it out. "We'd go back and play the game over and over again to see what needed to be added, then repeated that process endlessly," he explained. Aonuma also reiterated that it's possible to fight the final boss within 10 to 15 minutes -- but that the player would have a very hard time since Link wouldn't have the benefit of weapons and upgrades found throughout the lengthy quest.

WWE's 2017 Royal Rumble is in the books and, as per usual, the event was filled with both awesome and infuriating moments. The Undertaker, Goldberg, and Brock Lesnar all clashed inside the final moments of the Rumble match itself while John Cena captured the WWE World Championship from AJ Styles and Kevin Owens fended off Roman Reigns - Reigns, who'd later show up in the Royal Rumble itself in the #30 spot!

So what worked and what didn't? What made us cheer with delight or jeer with intense fury? Sure, you can't please everyone but, you know, you can also NOT have Roman Reigns eliminate Undertaker. It's a clearer line than you think. If you'd like to check out my Royal Rumble Live Blog and Reactions piece from Sunday night, you can read it here.

The Good Place Renewed for Season 2 by NBC

NBC has officially renewed its hit comedy The Good Place for Season 2.

The second season, similar to the first, will consist of 13 half-hour episodes. NBC believes what series creator Mike Schur "brought us with the first season of ‘The Good Place’ was just extraordinary."

"A big thank you to Mike, the writers and cast for delivering a series in which we all take such enormous pride," NBC Entertainment president Jennifer Salke said in a statement.

The Good Place follows Kristen Bell's character Eleanor Shellstrop, who wakes up to discover she has entered the afterlife after being struck and killed by a tractor-trailer. She finds out from Michael (Ted Danson), her facilitator, that because of her desire to help others and do humanitarian work while she was alive, Eleanor has been able to enter a utopia called "The Good Place." However, she finds out she has been mistaken with someone with the same name, and must hide her past in order to remain in this utopia.

One portion of the collection (and be sure to read IGN's Kingdom Hearts 2.8 review) in particular, 0.2 Birth By Sleep - A Fragmentary Passage, offers more than just table setting. It delivers some important insight into what to possibly expect from the long-awaited sequel in the series. From gameplay to the story, Aqua’s journey through the Dark World is the closest we've come to playing Kingdom Hearts III, and here's what that experience tells us about what's to come for Sora, Mickey, and the rest of the gang.

There's been a Sam Fisher-like silence regarding the Splinter Cell movie lately, but it's still happening with Tom Hardy.

Splinter Cell producer Basil Iwanyk opened up about the project with Collider. He confirmed that Assassin's Creed's domestic box office woes haven't impacted the film and there's a screenplay waiting for Hardy's approval.

"We’ve got a script," Iwanyk said. "It’s a little long, but it’s the best script we’ve had. ... This draft kind of addressed Tom’s notes. We’re going to give it to Hardy in the next couple of weeks and hopefully try to get it done this year."