The beta is currently only available on Steam, but Chucklefish says GOG buyers will have access in "a few days." There's been no mention of the beta coming to other platforms.

To access the Steam beta, find Stardew Valley in your game library, right-click it and select properties, then go to the "Betas" tab in the pop-out window. Enter the beta password "jumpingjunimos" and click "Check Code," then use the drop-down menu above the code to select the beta. Steam will automatically download the update from there.

The images include a disgruntled Robin who doesn't want to be in the shadow of Batman anymore. Cyborg, Beast Boy, and Raven are also mocking Wonder Woman, Aquaman, and Superman, while Starfire seems to be quite annoyed with the Flash. Check out the posters in the image gallery below.

The feature-length animated movie, based on the Cartoon Network show, opens in theaters on July 27 in the U.S. and August 3 in the UK. The story follows Teen Titans Robin (Scott Menville), Starfire (Hynden Walch), Raven (Tara Strong), Cyborg (Khary Payton), and Beast Boy (Greg Cipes) trying to get their big pop-culture break by seeking out a popular Hollywood director (Kristen Bell).

A role-playing game from CD Projekt Red will indeed be at this year's Electronic Entertainment Expo.

According to the official E3 2018 exhibitor directory, CD Projekt Red will be in attendance with an unspecified RPG for PlayStation 4, Xbox One, and PC. The game in question is almost certainly Cyberpunk 2077, which we heard earlier this year will likely be at E3 2018 and is among the games rumored to appear at this year's expo.

Epic Games has confirmed Fortnite Season 4 starts tomorrow, May 1, and it looks like the comet will finally hit the map, alongside new skins.

"Brace for impact!" tweeted the official Fortnite Twitter account, confirming today is the last day of Season 3, and that Season 4 will kick off tomorrow, May 1.

Warning: Spoilers for Avengers: Infinity War follow. Turn back now if you haven't yet watched the film.

Avengers: Infinity War assembles nearly every MCU hero for the battle against Thanos, but there are a few notable absences, including Tessa Thompson's fierce Asgardian warrior Valkyrie. There are a few theories about her fate, but Thompson has a hilarious explanation of her own.

The actress jokingly explained on Twitter Valkyrie actually turned into a cute little goat who's being carefully watched by Bucky Barnes in Wakanda.

me in Infinity Wars. pic.twitter.com/g7fAjUcm95

This post contains spoilers for the events of Avengers: Infinity War and the April 27 episode of Marvel's Agents of SHIELD, titled "Option Two." For more on SHIELD and Infinity War, here's a tease at how the film's events will impact the show going forward.

The ending of Avengers: Infinity War has massive repercussions for the entire Marvel Cinematic Universe, as multiple superheroes - and trillions of other souls across the universe - were wiped from existence by Thanos with a simple snap of the Infinity Gauntlet.

You Can Now Buy a Picard Facepalm Statue

The bust, from IconHeroes, is available exclusively from ThinkGeek. It captures the USS Enterprise-D captain executing his glorious facepalm maneuver. Priced at $65 USD, the statue measures six inches tall and four inches wide. 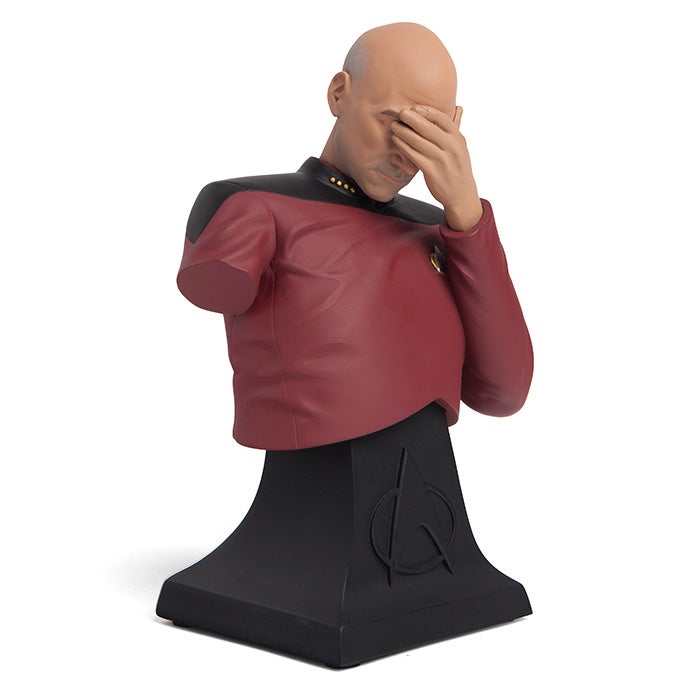 Fear the Walking Dead Season 4 showrunners Andrew Chambliss and Ian Goldberg revealed one of the actors in the AMC series requested to be killed off last season.

Fear the Walking Dead lost a cast member in the latest episode, and it turns out that they'd been eager to leave the series for a little while.

Nick Clark was the latest victim in a line of shocking deaths, gunned down by the 12 year-old Charlie just three episodes into the fourth season. But it's not all doom and gloom. In an interview with THR, Chambliss and Goldberg revealed that actor Frank Dillane wanted to leave the show.

The Tremors TV Reboot Has Been Canned, Says Kevin Bacon

The Tremors reboot TV show has been canned, says Kevin Bacon, despite a "fantastic pilot."

After 25 years, the sci-fi franchise was set to return to our screens as a rebooted TV show based on the original 1990 film. Plans for the series were announced in 2015, and US network SyFy became involved last year.

Rockstar has announced that a new trailer will be released for Red Dead Redemption 2 on Wednesday, May 2.

Rockstar's given no word on what to expect from the trailer, but after one trailer focused on the game world and another revealing something of the story, we'd hope for a chunk of representative gameplay to have a look at.