The LotR Cast Is Still a Fellowship 15 Years Later

The Fellowship of the Ring didn't last long, but the friendships from the Lord of the Rings trilogy have endured for 15 years now.

Merry actor Dominic Monaghan posted photos on Instagram of himself getting together with cast members for a bite. The Lord of the Rings reunion included Viggo Mortensen (Aragorn), Elijah Wood (Frodo), Orlando Bloom (Legolas) and Billy Boyd (Pippin).

The Lord of the Rings: The Fellowship of the Ring debuted 15 years ago last month. So they have carried on their friendship for longer than Frodo carried the ring to Mordor.

Bane is returning to Gotham City in the next Batman story arc, fittingly titled "I Am Bane." When he arrives, adorned in his classic costume with veins full of the Venom super-steroid, he will aim to take vengeance on Batman (natch).

What did Batman do this time? He formed his own personal Suicide Squad to break into Bane's fortress on Santa Prisca, all in a play to kidnap the Psycho Pirate, who has the power to help the mentally fractured Gotham Girl. It turns out that Venom is highly addictive and not having it in his system leaves Bane in constant agony, but the Psycho Pirate's power allows him to feel at peace. He wants to get the Pirate back and make Batman pay.

We hopped on the phone with Batman writer Tom King and artist David Finch to talk about what they've got planned, starting with tomorrow's Batman #16. While a big battle with Bane will most certainly come, this issue is a surprisingly light-heated one, at least in part, thanks to the Bat-family meeting in a Batman-themed fast-food restaurant instead of the Batcave.

A Star Wars Story We Want: The Ancient Jedi

The Star Wars Expanded Universe may be gone, but some of the saga's grand history involving the ancient Jedi could still be made into amazing standalone movies. A Star Wars Story like Knights of the Old Republic or Dawn of the Jedi, for example, could thrill mainstream crowds and old-school fanboys alike.

Many fans were not happy when Disney declared the EU to no longer be canon (retitling it Legends in the process). But what if the Legends could return? Star Wars Rebels has already introduced Grand Admiral Thrawn into the new timeline, and if the rumors are true that Woody Harrelson is playing Garris Shrike in the Han Solo movie, then Thrawn won’t be the only EU character to be making a comeback. More intriguingly, a recent episode of Star Wars Rebels alluded to a war in the past between the Jedi and Mandalore. Star Wars fans may recall that the Mandalorian Wars were a critical part of the backstory for Star Wars: Knights of the Old Republic, which is also one of the all-time great Star Wars video games. If aspects of KOTOR are still canon, then there could be ripe material from that era for a future Star Wars anthology film to explore. And it’s not the only piece of ancient Star Wars history that deserves to be fleshed out on the big screen…

Crunchyroll will roll out Anime Movie Night this April, bringing films and TV series to the silver screen.

The special anime event will happen each quarter for the rest of the year. Anime Movie Night will feature films from Japan or even episodes from a show, though no titles were specified.

"As demand for anime continues to grow in the U.S. and around the world, it's a thrill to have the opportunity to bring the latest hits, as well as the anime that fans know and love, into theaters — often for the very first time," said Crunchyroll general manager Kun Gao in a statement.

Screenvision Media and KAOS Connect are teaming up with Crunchyroll for Anime Movie Night. The event will include behind-the-scenes content and industry interviews.

This year marks the 20th anniversary of Final Fantasy VII, and to celebrate, a new Kingdom Hearts image has been released that pays homage to Square's beloved 1997 role-playing game.

The official Kingdom Hearts Twitter account posted the following image, which is a clear callback to the box art of the original Final Fantasy VII: 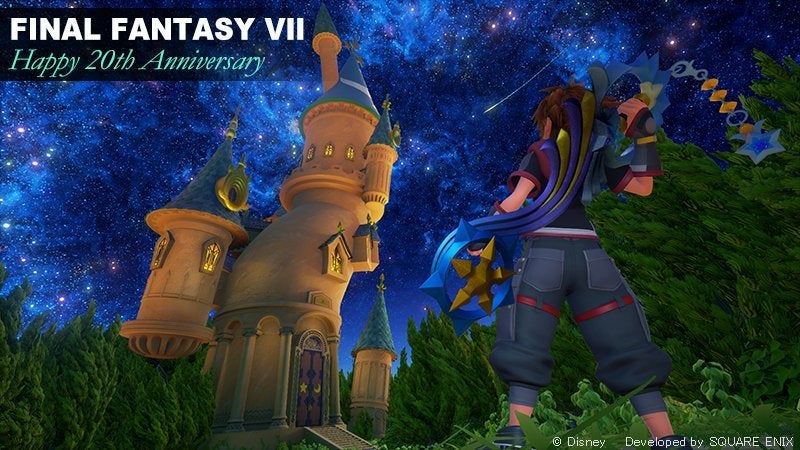 The beta will include the Duel, Brawl, Dominion, and a new 'Elimination' mode that was not playable during last week's closed beta. Elimination is described as a "best-of-five series of four-on-four matches with no respawns," according to Ubisoft.

The beta will also continue the War of the Factions meta game, which lets players pick from the Knight, Samurai, or Viking factions to control territories. The winning faction will claim the best rewards once the full game launches.

The ability to transfer your characters and progress from the last-gen versions of Grand Theft Auto Online will cease on March 6, 2017.

In a post on its official website, Rockstar Games announced that those who still wish to move their GTA Online content from PS3 or Xbox 360 to PlayStation 4, Xbox One or PC will need to do so before that date.

The current-gen versions of GTA Online boast a number of enhancements over their PS3 and Xbox 360 counterparts. In addition to improved visuals, the PS4, Xbox One and PC versions feature loads of additional content that has been added through free updates.

Morrowind Is Coming to The Elder Scrolls Online

Bethesda has announced the next expansion for The Elder Scrolls Online, Morrowind, which will release worldwide on PC, PS4, and Xbox One on June 6.

The Elder Scrolls Online: Morrowind will take place 700 years before the events of The Elder Scrolls III and will include the same “key points of interest” found in that version of Morrowind, allowing players to visit Vvardenfell, Seyda Neen, the Ashlands, an under-construction Vivec City, and more.

Morrowind will also include a new class, the Warden, allowing players to “harness nature-based magic” and including a new combat ally, the War Bear. The expansion will also include Battlegrounds, a new 4 vs. 4 vs. 4 PvP mode.

Bethesda will offer a number of ways to purchase The Elder Scrolls Online: Morrowind, including a physical or digital standard edition for $59.99. Existing players will be able to unlock Morrowind content for $39.99. A Digital Collector’s Edition will also be available for $79.99 (or $59.99 for existing players who want to upgrade), which includes a grey War Bear for the Warden, an armored War Horse, a Dwarven Spider pet, a Morag Tong converter, and exclusive character emotes.

Filmmakers often run into all sorts of roadblocks in the course of making movies, and the problems are compounded with franchises — the longer a series goes on, the more things can go wrong. But nothing is quite so bad for everyone involved as losing a cast member.

Over the years, a number of movie franchises have had to go on (and some simply can’t) after key members of their cast have died. Often those movies are completed in tribute to the person the project lost, but it’s true that some filmmakers do a better job than others. As the Star Wars series deals with this very issue following the passing of star Carrie Fisher, we've gathered examples of how other major franchises have pivoted following the untimely loss of a lead star.

The Flash Preview: Iris Wants to Team with Wally

A bounty hunter with "Vibe" powers -- DC Comics' Gypsy -- disrupts Barry and his team this week on The Flash episode, "Dead or Alive," airing Tuesday, January 31st on the CW.

On top of that, Iris, feeling a little invincible ("I don't die until May"), starts investigating dangerous arms dealer case, wanting to team up with her brother Wally to take down some bad guys.

In this exclusive scene from the episode, Wally (Keiynan Lonsdale) warns Iris (Candice Patton) about getting too close to the case while Iris brings up the fact that, in Flashpoint, she and Wally were a crime-busting bro/sis duo. Check it out!

The official synopsis for "Dead or Alive" reads:

H.R.’s (Tom Cavanagh) past catches up with him when a bounty hunter with vibe powers named Gypsy (guest star Jessica Camacho) arrives in Central City to bring him back to Earth-19 to stand trial for his crime. It turns out inter-dimensional travel is illegal on their Earth. H.R. surrenders but when Barry (Grant Gustin) and Cisco (Carlos Valdes) find out that H.R.’s only hope would be to challenge Gypsy to a fight to the death, they intercede and Cisco offers to fight Gypsy instead.