Marvel's Daredevil has been canceled after three seasons.

Deadline received a statement from Netflix saying, “Marvel’s Daredevil will not return for a fourth season on Netflix. We are tremendously proud of the show’s last and final season and although it’s painful for the fans, we feel it best to close this chapter on a high note. We’re thankful to showrunner Erik Oleson, the show’s writers, stellar crew and incredible cast including Charlie Cox as Daredevil himself, and we’re grateful to the fans who have supported the show over the years. While the series on Netflix has ended, the three existing seasons will remain on the service for years to come, while the Daredevil character will live on in future projects for Marvel.”

Marvel's Runaways will return to Hulu on Friday, December 21, with an exciting new season, and set of adventures for our heroes to embark on.

In anticipation of its upcoming release, Hulu has unveiled the official Season 2 trailer, which you can check out for yourself, below:

According to the synopsis, "The Runaways have left their homes (and evil parents) behind and now have to learn to live on their own. As they scavenge for food, search for shelter, and take care of one another, our kids begin to realize that, for better or worse, they’re stuck with each other. And it’s up to them to take down PRIDE once and for all. But someone sent a mysterious message to Jonah… Is there a mole in the Runaways? Meanwhile, PRIDE is focused on finding their children, and Jonah has his own dangerous plan in mind."

Netflix and Dreamworks Animation have debuted the trailer for Season 8 of Voltron: Legendary Defender - the final outing for the Paladins and their allies as they attempt to defeat the Galra Empire once and for all.

The action-packed new teaser features a look back at Keith, Lance, Hunk, Pidge, Shiro, and Alura's journey up to this point, along with plenty of explosive battle scenes from Season 8, as well as an intriguing split-second shot where Haggar seems to be channeling her former appearance as Honerva.

The stakes couldn't be higher in the final season - as Alura says in the teaser, "This is our only chance to save all of existence," so no pressure.

The final season of Voltron: Legendary Defender debuts globally on Netflix on Dec. 14.

Update: We've added some new info to this story! Read on for all the Spider-Verse cameo details...

Sony Pictures has released the official production notes and end credits list for Spider-Man: Into the Spider-Verse to media outlets, both of which reveal voice cast members and characters that were previously not known to be in the film.

Some SPOILERS ahead for Spider-Man: Into the Spider-Verse, so read on at your own risk!

The surprise cast members revealed in the press materials are listed after our video review below:

The surprise cast members revealed in the press materials are:

A high-end clothing line based on the outfits in Red Dead Redemption 2 has launched, so you can finally dress as nicely as your very own Arthur Morgan.

Premium clothing website Barking Irons has released a small line of clothing staples based on the world of Red Dead Redemption 2, first reported by Polygon.

The clothes have a subtle enough rustic style that at first glance, they aren't an obvious game reference – while true Red Dead fans will certainly notice the little nods.

BioWare is holding a closed alpha for its upcoming online multiplayer action RPG Anthem from December 8-9, and registration is open now until December 3.

Announced by EA, the alpha is part of EA’s Community Playtesting program, and will be available on PC, Xbox One and PlayStation 4, though openings are predictably limited. Multiple sessions will be spread across the two days, and those who make it into the alpha can participate in one or all of them. As is typical for an alpha, this will be used to test out matchmaking, server loads, and more.

To sign up, simply head to the EA Community Playtesting webpage, sign in with an EA account, choose a platform and when you’d like to play the alpha, and submit. Registration is "first come first served” and if you get in, a confirmation will appear on the Community Playtesting site, and you will receive an email letting you know how to download the alpha.

UPDATE: Tom Hanks is reportedly back in negotiations to play Geppetto in Disney's Pinocchio remake. Instead of Paul King, the Pinocchio remake will now reportedly be directed by Robert Zemeckis, who directed Hanks in Forrest Gump, Cast Away and The Polar Express. Deadline reported on Wednesday that Hanks has read a script by Zemeckis and Chris Weitz, and Hanks contacted Zemeckis directly to tell him that he wants to be in the movie. Deadline says that negotiations are still very early and nothing is official yet. The original story from November 2018 is below. [poilib element="accentDivider"] ORIGINAL STORY: Tom Hanks is in early discussions to play Geppetto in Disney's upcoming live-action adaptation of Pinocchio, according to Variety. Director of Paddington, Paul King, will be directing the film, while Andrew Miano and Chris Weitz are on as producers. King, Weitz, and Simon Farnaby all wrote the current draft of the screenplay. [ignvideo url="https://www.ign.com/videos/2018/02/21/paddington-director-is-on-board-for-live-action-pinocchio-movie-ign-news"] Pinocchio joins the other recent animated Disney films who had received live-action remakes and saw huge numbers at the box office, including Beauty and the Beast which made $1.2 billion in 2017 and The Jungle Book which was at $966.5 million worldwide in 2016. Disney is already planning on releasing three live-action adaptations in 2019, with Dumbo on March 29, Aladdin on May 24, and The Lion King on July 19. [widget path="global/article/imagegallery" parameters="albumSlug=every-upcoming-disney-live-action-remake&captions=true"] While we wait for more details to emerge about the remake of the classic Pinocchio, check out every Disney live-action remake that is already planned, including Mulan, The Litte Mermaid, and Lilo and Stitch. [poilib element="accentDivider"] Jessie Wade is a news writer at IGN and hearts Tom Hanks. Follow her on Twitter @jessieannwade.
Posted in Uncategorized

Tesla Tried to License Mario Kart for an in-Car Version

On Twitter earlier today, Musk was asked about the potential of making certain games playable in Teslas. Specifically, someone asked about Mario Kart. 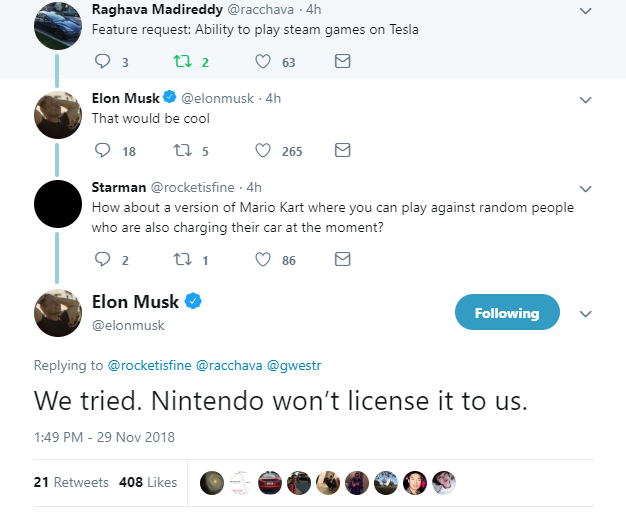 "How about a version of Mario Kart where you can play against random people who are also charging their car at the moment?" asked @rocketisfine.

The Elder Scrolls: Blades Delayed to 2019

The Elder Scrolls: Blades, Bethesda’s upcoming mobile entry into the long-running fantasy RPG franchise, has been delayed to early 2019.

Revealed on Twitter, the game is still set for an iOS and Android release, and fans can currently sign up for early access. Blades was initially set for a 2018 release, though with just over a month left in the year, this move isn’t particularly surprising.

Blue Beetle Movie in the Works at DC and Warner Bros.

The first Latino superhero movie about Jaime Reyes/Blue Beetle is currently in the works at DC and Warner Bros., according to TheWrap.

Gareth Dunnet-Alcocer, who is known for Universal's Scarface, will be writing the script, with Zev Forman on as an executive producer for Warner Bros.

Warner Bros. was rumored to be developing a Booster Gold-Blue Beetle live-action film with Greg Berlanti back in 2015, but that didn't go anywhere.