Independent developer Squad, which created and previously owned the Kerbal Space Program IP, will continue working on future updates and this year's forthcoming expansion, Making History, according to the announcement. The expansion will add a mission builder and the History Pack — the latter sees players go on Kerbal Space Program versions of historical space missions.

The development team also chimed in on the announcement, assuring fans the acquisition "doesn't change much for the KSP community." It added, "Squad and the current development team is still here and we’re hard at work on KSP and its future updates, but now we are fortunate enough to do so with the help of an experienced publisher like Take-Two...."

Ubisoft has created and revealed a new logo, an update to the blue swirl seen on the company's game since 2003.

A similar design, but now presented in monochrome, the logo will "take on the colors and textures of our worlds" according to an Ubisoft blog post.

The new logo "is minimalist, modern and monochromatic", reads the blog. "It’s a window into our worlds, giving a preview of what’s to come by highlighting the artistry that goes into creating them. The swirl and the letter O are both deliberately created to be reminiscent of hand-drawn shapes and represent our human qualities of enthusiasm, curiosity and the grain de folie that Ubisoft is known for."

Godzilla vs. Kong has found its director.

The Hollywood Reporter reports Blair Witch director Adam Wingard will helm the upcoming monster film, which is scheduled to be released on May 22, 2020. Wingard's next movie is the Death Note live-action remake, which will premiere on Netflix on August 25.

Founder's Packs, which offer discounts on characters and skins, are still available on the game's official site, with 3 tiers to choose from: Recruit, Soldier, and Master.

The Soldier and Master packs include name reservation, "which will be opening up soon."

NCSoft promises "a whole host of improvements" directly resulting from player feedback during the closed beta.

Master x Master has unique features to help it stand out from the MOBA crowd, including an arcade-feeling control scheme and a "tag" system that allows you to "instantly change Masters in the midst of battle," letting you "be your own wombo combo," according to the developer.

In addition to a Beetlejuice Fun Pack, Warner Bros. will release Team and Fun Packs based on Teen Titans Go! and The Powerpuff Girls.

The Teen Titans Go! Team Pack includes minifigures of Raven and Beast Boy, as well as a 3-in-1 T-Car, which can be reassembled into the Forklift and T-Plane. Meanwhile, the Fun Pack comes with a Starfire minifigure, as well as the 3-in-1 Titan Robot that can be reconstructed into a T-Rocket or Robot Retriever.

Both Teen Titans Go! expansion packs will grant access to an original animated episode that tells the story of how the crew of young DC heroes found their way into the world of LEGO Dimensions. Additionally, the Starfire, Raven and Beast Boy minifigures unlock access to the Teen Titans Go! Adventure World, which includes locations like the Titans Tower and Wacka Doodles Amusement Park for you to explore.

Help us get to 5000 likes! Like our pages on Facebook and Twitter to get the latest deals straight to your news feed and also to find exclusive codes that we provide for our readers.

It's that time again! Tesco have put together (for the second time this year) a discount code which sees you save £20 when you spend £150 or more on Technology and Gaming.

7 Videos to Watch Before Visiting Tokyo

Japan's capital city is crammed with cosplay, themed cafés and arcades, offering a unique games culture you can't experience anywhere else. If you're planning a trip to Tokyo, our series of videos should help you decide what to do while you're there.

From maimai MURASAKi to Gunslinger Stratos 3, the world's most difficult games can be found inside Japanese arcades. If you want to test your mettle in the ultimate crucible, Warehouse Kawasaki is the place to go.

Set over four floors, two of which house a dedicated recreation of the famous Kowloon Walled City, this arcade is crammed with some of Japan's most punishing titles.

Two months ago HTC tried to pull in new Vive customers with a limited time $100 off promotion, and today it  announced another deal to attract new buyers: a free game.

Starting today, every HTC Vive will come with a free copy of Star Trek: Bridge Crew, the multiplayer spaceship simulator from Ubisoft and Red Storm Entertainment.

Star Trek: Bridge Crew is a VR only multiplayer experience that lets you and three friends take control of a Starfleet ship and tackle various missions based in the Star Trek universe.

In our preview of Star Trek: Bridge Crew we called the game "some of the most fun we've had in VR," and now that it comes with the system, it should be even easier to find a crew to explore with.

A piece of merchandise seems to have leaked the logo and protagonist for the next Assassin's Creed game.

Comic Book reports that a reliable source with ties to Ubisoft provided it with images from promotional merchandise for the likely-titled Assassin's Creed Origins.

The pictures feature T-shirts which are sporting what appears to be the new logo printed on both the tag and back of the shirts. The logo shows the usual Assassin insignia featured throughout the games with an Egyptian twist as an Eye of Horus sits in the middle of the crest. 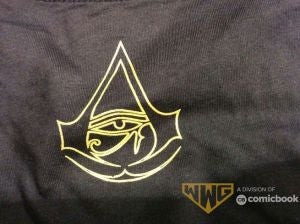 Stranger Things' Millie Bobby Brown auditioned for the role of X-23/Laura in Logan.

Brown discussed her audition during an interview with Evan Rachel Wood (Westworld) as part of Variety's Actors on Actors series. The actress said she wasn't nervous reading for the role in front of Hugh Jackman and director James Mangold, and believes it's her best audition.

"I was like, 'It's going to be amazing, I'm going to really prepare,' and I sat in my room reading the lines," she said. "Honestly, for me, I felt so—I felt an actor, in the audition room, hitting Hugh Jackman, and James Mangold sitting right in front of me."