PC Arkham Knight players can now request a refund through to the end of 2015.

Arkham Knight re-launched on PC last week, but was met with criticism once more. On Steam and Reddit, players revealed problems including stuttering, frame rate drops, and freezing.

AMC debuted the first trailer for its Preacher adaptation during Sunday's episode of The Walking Dead, and soon made the video available online.

The series, which filmed its pilot earlier this year, is based on Garth Ennis and Steve Dillon's comic book series of the same name. With Breaking Bad's Sam Catlin serving as showrunner and developed for TV by Seth Rogen and Evan Goldberg, Preacher stars Dominic Cooper, Ruth Negga and Joseph Gilgun.

The new AMC drama follows Cooper as Jesse Custer, a preacher in a small town in Texas who develops special abilities. Negga stars as Jesse's ex-girlfriend Tulip, while Gilgun plays an Irish vampire named Cassidy. Together they set off on a journey to find God in the flesh.

One of the biggest questions coming out of The Walking Dead: Season 5's finale was "what happened to Morgan?" After leaving Lennie James' character in a rough place in Season 3's "Clear," the series reintroduced Morgan as a zen warrior who was a stark contrast to the current no-nonsense Rick (Andrew Lincoln).

Spoilers through The Walking Dead: Season 6, episode 4, "Here's Not Here," continue below.

Of course, fans might not have wanted that big answer to be delivered the week after The Walking Dead left several characters in near-death situations that demanded immediate answers. Instead of resolving whether people like Glenn survived or not, the AMC drama pressed pause on the present conflict to delve into the origins of Morgan's personality makeover.

PlayStation Boss Talks The Challenges of VR in Australia

In the wake of Paris Games Week, PlayStation VR feels more like a tangible piece of hardware than ever. But while Sony has proved to a lucky few that it works - in certain cases, spectacularly - its future still feels like an enormous black hole.

Beyond the obvious questions of price and release date, there are broader, more pertinent conundrums around getting the tech into the hands of consumers. If VR relies on a proof of concept, how will Sony ensure we can try before we buy? Will anybody outside of the most dedicated early adopters be invested in the concept? Are we actually ready to sit on our couches with headsets strapped to our faces for hours at a time?

After Sony's press conference at last week's show, I sat down with Managing Director of Sony Computer Entertainment in Australia Michael Ephraim to talk it out.

Across the six territories in which it debuted, SPECTRE earned a whopping $80.4 million. In the United Kingdom specifically, the latest 007 film pulled in an estimated £41.7 million ($63.8 million USD) during its first seven days.

As such, SPECTRE not only eclipsed Skyfall's seven-day record gross, but also managed to dethrone Harry Potter and the Prisoner of Azkaban as the biggest opening in the nation's box office history.

"We are delighted that audiences in the UK and Ireland continue to embrace these stories about one of our biggest and best cultural icons," Sony Pictures UK managing director Peter Taylor said. "This opening proves once again, that the film world of James Bond speaks to cinema-goers like no other.”

Contrary to prior reports claiming Lionsgate would be renaming the Mighty Morphin crew, Saban's Power Rangers will instead be using the original character names for its upcoming film.

The Martian Roasts Burnt, Averts Crisis to Remain No. 1

Ridley Scott's sci-fi hit The Martian continued its dominance at the box office this weekend, claiming the top spot once again, with $11.4 million.

In fact, Variety notes that Bullock's starring role in Warner's political satire is now the worst wide-scale release of her career.

While the pair still managed to crack the Top 10, the same couldn't be said for Scouts Guide to the Zombie Apocalypse, which bombed in 12th place with just $1.8 million.

Noct: Creating a Soundtrack for the Apocalypse

Like the very best survival horror experiences, Noct is nothing if not unsettling. Dropped into a world you don’t know, shrouded by darkness, with your only directions provided by anonymous text messages, Noct forces you to rely on instinct and put your faith in total strangers.

This experience is somewhat analogous to the orchestration of the game’s soundtrack. Nine Inch Nails guitarist Robin Finck isn’t a gamer. Nor has he ever contributed to the soundtrack for a game before (he did contribute to the soundtrack of John Carpenter’s Ghost of Mars movie, but by his own admission that was as more of a ‘hired gun’ than as a composer).

The world of gaming is utterly foreign to Finck. Yet after being approached by Devolver Digital co-founder Mike Wilson, and with an openness to new artistic challenges (outside of his work with Nine Inch Nails, Finck has also created a stage production, contributed ink drawings to album artwork for the band Oceansize, and worked on one of the most infamous albums in music history, Guns ‘n’ Roses’ Chinese Democracy), Finck soon found himself collaborating on a videogame soundtrack with a musician he’d never met on the other side of the world.

With Star Wars: The Force Awakens less than two months away, Haier Asia has unveiled a special R2-D2 mini-fridge that features a rotating head, sound effects, and remote controls. 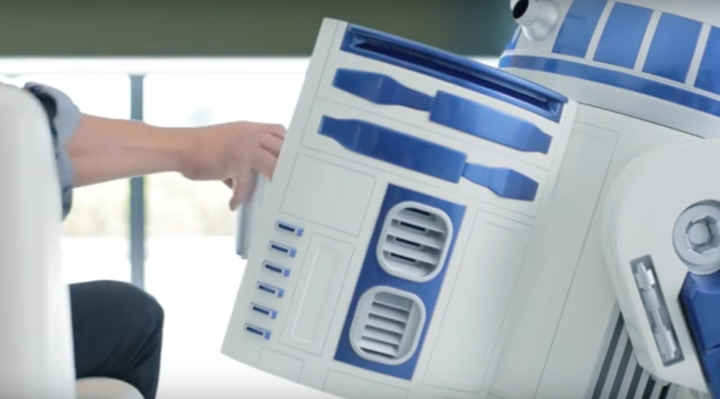 Unfortunately, however, acquiring the fridge will be an expensive endeavor. Haier is charging 998,000 yen for the appliance, which TechRadar notes is just north of $8,200 USD before factoring in shipping, tax, and import fees.