While the three-episode Season/Series 4 of Sherlock is still a long way off, fans can look forward to the show's upcoming "through the looking glass"-style special set back in the original Sherlock Holmes time period. We're still not sure when it will air (executive producer Mark "Mycroft' Gatiss once stated it was to be a Christmas special), though creator Steven Moffat did have a few tidbits to share about it during a recent Q&A session at the summer TCA Press Tour.

"It's probably Christmas-ish," Moffat told the ballroom full of TV critics. "We don’t actually know. We’re not making this up.”

So what was the inspiration for setting this particular Sherlock tale in Victorian times? "Just because we can, really," Moffat explained. "Mark

Game of Thrones has cast Ian McShane in season six of the hit HBO fantasy series.

The network confirmed the Deadwood alum for the upcoming season but did not reveal his role, according to The Hollywood Reporter. 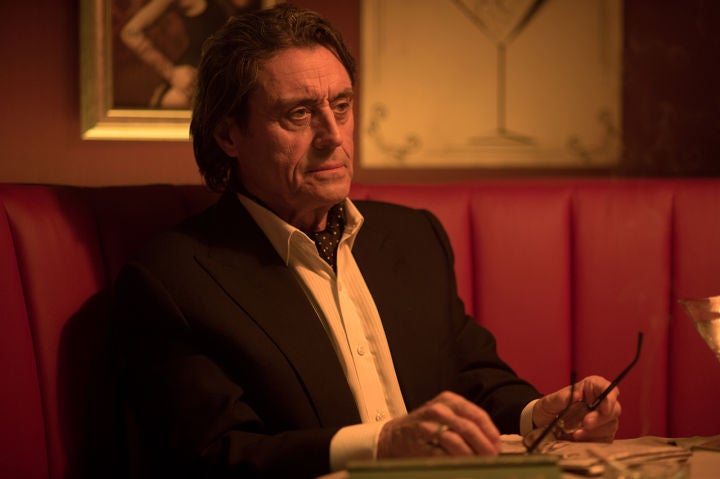 McShane, best known for his role as the appropriately named foul-mouthed entrepreneur Al Swearengen in Deadwood, is the first new cast member to be confirmed for Game of Thrones season six.

The Leftovers: Lindelof on Season 2’s New Setting and Story

Season 1 of HBO's The Leftovers was based on a book of the same name by Tom Perrotta. And Lost's Damon Lindelof, aided by Perrotta, reshaped the story for TV, making up the entirety of the first season. There is no follow-up book to The Leftovers though, so Season 2 - which premieres Sunday, October 4th - was up in the air, story-wise.

Because of this, certain elements of Season 2 (new location, reshuffled cast) might give off a "reboot" impression, even though it's where Lindelof and Perrotta naturally wanted to take things. "Reflecting back to Tom’s book, we always wanted the show to feel authentic," Lindelof said of the series' grim tone during a Leftovers Q&A panel at the TCA Press Tour, "but the first season of the show we make no apologies for. We wanted to ground the world. And to many, that may have felt bleak and depressing, but to us, it kind of felt honest. But what was really important to us is that the characters on the show didn’t want to feel that way."

Channing Tatum has now reportedly locked down his deal with 20th Century Fox to star as Gambit, following prior reports that negotiations were falling apart.

THR's sources claim that while there were a few hiccups in working out the deal, Tatum's role as the card-throwing mutant wasn't really in jeopardy. After all, the Magic Mike star has already invested a lot of time into the character.

J.J. Abrams, the director of Star Wars: The Force Awakens, broke his back while attempting to help Harrison Ford during the filming of Disney's highly anticipated sci-fi movie.

Last year, we learned the Han Solo actor injured his ankle when the Millennium Falcon's hydraulic door closed on his leg. Abrams, in an attempt to help Ford by lifting the door, then managed to break his own back.

Abrams tried to hide the injury by wearing a back brace under his clothes, he revealed on The Daily Show, noting that Ford managed to recover much quicker than himself.

After a surprise minute-long clip shown at Comic-Con earlier this summer, HBO debuted a lengthy trailer for the upcoming series Westworld this week at the TCA (Television Critics Association) press tour. The trailer has not been released publicly yet, but my first impression, based on that trailer, is that this looks to be an incredibly cool, compelling series.

Based on the 1973 film from Michael Crichton (Jurassic Park), about a wild west theme park populated by robots that allow guests to play out all sorts of cowboy scenarios -- until, of course, something goes terribly wrong -- Westworld comes from executive producers J.J. Abrams, Bryan Burk and Jonathan Nolan (The Dark Knight trilogy, Person of Interest) and Lisa Joy (Burn Notice), with Nolan and Joy writing and Nolan directing the pilot.

Bruce Campbell Promises So Much Blood in Ash vs. Evil Dead

During the Ash Vs. Evil Dead panel at the TCA Press Tour, executive producer/star Bruce Campbell made sure to let everyone on hand know just how much blood and gore there'd be on the upcoming Starz series - which premieres October 31st.

"People ask how much blood is there going to be," Campbell noted. "I went blind the other day shooting a scene. Just picture that. Like, take a shower and open your eyes right into the faucet. That’s how much blood there is on the show."

"I’ve been gagged once and I went blind," Campbell added. "That’s a lot of blood in the show. So anyone who’s looking for it, it’s coming your way."

Campbell, who appeared on the panel alongside creator/director Sam Raimi and co-star Lucy Lawless, also made sure to speak about how this series, based on the Evil Dead horror trilogy (which last graced us in '91, not counting the 2013 remake) was totally fan driven. "The fans are responsible for every single bit of this," he said. "They’ve been relentless for years. The last Evil Dead movie was 24 years ago, 1991. We shot Army of Darkness. They haven’t shut up since. So no matter what we say to them or what we give them, it will never be enough, and we’re very grateful for that."

Tron himself, actor Bruce Boxleitner, says he's "moved on" from the franchise as a result of Disney's decision in May to pull the plug on Tron 3.

When /Film asked Boxleitner if he thought Tron 3 could be revived at a later point, he said, "“I don’t really care anymore. ... I’m done with it. I’ve moved on. I hate to say that but it’s been too up and down for me. I would rather not just keep going. I don’t want to repeat my career anymore."

Although Boxleitner said it "breaks my heart" that the studio decided to cancel Tron 3, he added, "I understand the times move on. Disney, it’s not in their